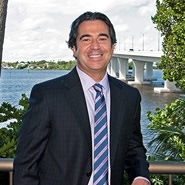 James Campo, President and Owner of Campo Financial Services, is a life-long resident of Martin County and one of the Treasure Coast's most respected financial advisors.

James launched Campo Insurance Agency in 1983. The firm, based in Stuart, Florida, began by specializing in personal and commercial risk management. In 1994, James expanded the business to include investment services. Today, Campo Financial Services provides insurance and wealth management planning for more than 1,000 local and national clients.

Integrity is the foundation of James' practice. He firmly believes in serving his clients with his undivided attention. James is a fee-based financial advisor, which means he has his clients' best interests in mind.

James was honored with the Communicator of the Year award by the Florida Association of Public Relations. He won an award from the Northwood University on Promotion of Philanthropy. James has earned the confidence of clients from retirees to multi-national charities. As the past President of the Planned Giving Council, he was often asked by the area's non-profit groups to talk about the benefits of charitable giving as a tax advantage, or demonstrate how to use wills or trusts to continue personal ideals and values into the next generation.

James was educated locally at Indian River State College and Florida Atlantic University. At Florida Atlantic, he received his Bachelor of Arts in Political Science with emphasis in taxation and economics. James is a Certified Financial Planner and a graduate of the Renaissance School of Social Capital. He holds his securities registrations 7, 6 and 63. He is licensed for Property and Casualty Insurance (2-20) and Life and Health Insurance (2-18).

James and his family live in Sewall's Point. The Campo Family attends the First Baptist Church of Jensen Beach.